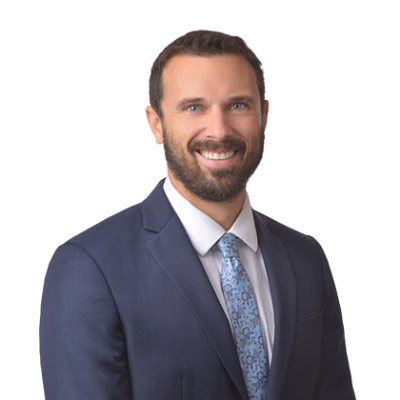 I am a personal injury lawyer working out of Murphy Battista LLP’s Vancouver and Surrey offices. Prior to attending law school, I attended the University of British Columbia where I obtained a B.A. with a double major in history and political science. After my call to the bar in 2009, I carried on a successful civil litigation practice at a large, full-service law firm in Surrey, where I became a Partner in 2015. I gained valuable experience working as both plaintiff and defence (ICBC) counsel prior to joining Murphy Battista.

My practice now focuses exclusively on representing individuals who have been injured. I take pride in working to obtain fair and reasonable settlements, and when necessary, proceeding to trial on behalf of my clients.

I represent individuals in:

I have represented my clients at all levels of court in our Province, including the Provincial Court, the B.C. Supreme Court and the B.C. Court of Appeal.

A featured guest speaker on the Law Show on CISL 650 AM, I have discussed topics relating to personal injury and motor vehicle accident claims. I have also been interviewed by the CBC for comment on various legal matters.

In my spare time, I enjoy playing hockey, reading and most of all spending time with my family.

John Cameron and Kevin Hyde represented AT who suffered multiple injuries in a car accident, including a persistent lower back pain and SI joint dysfunction. Many aspects of her life were affected as a result of her injuries, including her ability to work full-time. The court accepted the arguments of Mr. Cameron and Mr. Hyde that AT deserved compensation for her injuries as well as for the impact of her injuries on her employment. She was also awarded compensation to allow for future therapy. In total, Mr. Cameron and Mr. Hyde obtained an award of just over $280,000 for AT, an amount more than five times higher than the amount ICBC offered before trial.

Raj Dewar and Kevin Hyde were counsel for a 34 –year-old third generation stonemason who sustained injuries to his neck and right shoulder in two motor vehicle collisions. ICBC denied fault for both collisions until 2 days before the start of trial. The Plaintiff proceeded to trial and was awarded compensation for his injuries and losses in the amount of $673,770 plus costs and disbursements. The Plaintiff was also awarded double costs from the time of his formal offer to settle, beating ICBC’s formal offer to settle by over half a million dollars. The oral reasons included damages for $130,000 for pain and suffering, $98,600 for future care, and $395,000 for loss of earning capacity.

Kevin Hyde was co-counsel for a plaintiff property developer who successfully sued an assignee of a contract of purchase and sale on an indemnity agreement for damages and costs amounting to $125,255.77 that arose out of a failed real estate transaction.  Full indemnification for legal fees was also ordered following the trial.

Kevin Hyde was counsel for a plaintiff property developer who successfully sued the Defendant on a failed real estate transaction, obtaining damages for breach of contract, as well as pre-judgment interest and costs.

In Joba v. Basant Holdings Ltd, Kevin Hyde successfully defended a corporate client in a contractual dispute. The claim was dismissed in its entirety and costs were awarded to the client.

I would personally recommend Kevin P. Hyde from Murphy Battista LLP. Kevin represented me in a MVA case. Kevin was a pleasure to work with, He was very professional and informative. He was always in contact with me for every step of the way and help me get a fair settlement. Kevin helped me through a difficult time in my life, he truly takes pride in his work and is very knowledgeable.

I was really impressed with my Legal Team! From the very beginning, they were all straight up with me with everything that was relevant in the Case and how they were going to approach it! Their confidence in my case helped me to stay calm and focus on my Rehabilitation knowing I was in good hands legally. Thank you Scott Kevin and Ashika for your unbelievable support throughout my Case!!

Kevin Hyde represented me in a personal injury claim and obtained a great result. He’s fast, practical, personable and an effective negotiator. I’m not an easy client as I recently retired from a law practice where I did a lot of personal injury litigation but I have no hesitation in recommending Kevin for these types of claims.

Kevin Hyde represented my file. He explained the process clearly to me and was available to answer my questions. Mr. Hyde took the time to ask questions to fully understand how the accident affected all aspects of my life. He ensured that I saw the specialists that I needed to strengthen my case. He was well prepared at mediation and, as a result, we were able to avoid trial and to reach a settlement I was very happy with. Excellent representation all round!

I first met Kevin Hyde at the Surrey office. He was courteous and empathetic. He listened, explained the process and then provided options.Throughout the process, he provided timely updates and responded promptly to my questions. Most of all he got me the settlement I wanted. Very knowledgeable and professional. I will wholeheartedly recommend his services to anyone requiring an attorney.

I’ve had the pleasure of working with Kevin Hyde and am impressed with his professionalism and promptness with respect to my ICBC case. I interviewed several lawyers before signing on with Murphy Battista and it’s the best decision I made. As soon as ICBC found out I am working with Murphy Battista, the case was referred to another adjuster at ICBC and my treatment referrals started getting approved right away. You owe it to your self to at least speak with them if you require any services they provide. Many of the law firms that I interviewed would have a Client Service Manager or Office Manager type person take down my information, and then I would get 5 minutes with the actual lawyer to ask questions. Not here, Kevin spent close to two hours with me and my girlfriend getting to know us and our situation everything we should expect in the next while. The case is not close to being settled yet, but I am confident that I am in good hands.

I am very lucky to have Kevin Hyde as my lawyer. I got compensated more than I had expected thanks to Kevin’s due diligences and hard work. Thank you so much, Kevin!

I feel very fortunate that I was able to have Mr. Kevin P Hyde represent me in negotiating a fare settlement with ICBC after I was injured in an automobile accident. Kevin’s knowledge, experience and expertise in dealing with personal injury claims really made a difference. That, along with his excellent negotiating skills, made me feel confident that he would achieve a very favorable settlement outcome for me. I am very satisfied with the settlement Kevin negotiated for me. Kevin worked very hard for me and I would not hesitate recommending Kevin P Hyde to anyone who is in need of a personal injury lawyer.

I just settled my ICBC personal injury claim with Kevin Hyde and am very happy with my settlement and the attentive manner in which Kevin and the staff at Murphy Battista handled my case. I would highly recommend Kevin to anyone wanting a caring, professional, attentive, quality result. Thank you Kevin , Erin and all at Murphy Battista for helping me get my life back!

I want to say thank you to Kevin Hide, Steven Gibson, Scott Stanley and crews for helping me with my ICBC case. I would recommend this law firm to everyone that’s needs a professional and caring law firm. Steven, I thank you for being there for me at the time when I needed you most. Scott, this was a very difficult situation for the extenuating circumstances that presented themselves, and they went above and beyond to ensure my interests were always at the forefront. I was amazed at how much Kevin Hikes had dug into my files, and how he was indeed putting his full attention to this matter, which realistically is a small dollar amount in the grand scheme of things, but all that didn’t matter to Kevin, his pride and focus was on getting me the best result he could under the circumstances… even though I was in an accident that was not my fault, Murphy Battista continued to cover the cost of my rehabilitation. Kevin’s explanation of the risks and consequences of going to court, and the costs associated, and the rewards I might expect from such a judgment and possible subsequent appeal, helped me better understand that I was in a very unique position, between a rock and a hard place. Kevin, Thank you, Thank you, Thank you, after 4.5 years of this turmoil, your work and efforts got me the most I could expect under the unique circumstances that presented themselves, and for that I am truly grateful. You’re pride and focus helped me to write a final chapter in dealing with ICBC!

I highly recommend Kevin Hyde and his team at Murphy Battista. As a client, I felt cared for and am so grateful I had Kevin in my corner. I feel valued and will always be grateful for all his hard work.

My practice focuses exclusively on representing individuals who have been injured. I take pride in working to obtain fair and reasonable settlements, and when necessary, proceeding to trial on behalf of my clients.