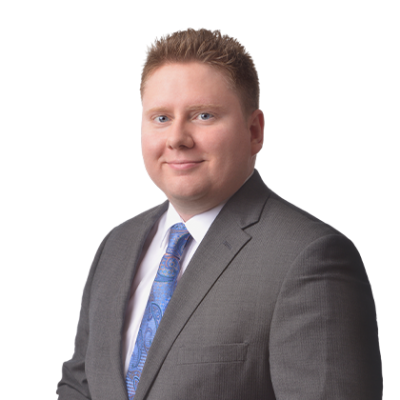 I was born and raised in Vancouver.  I am a lawyer at Murphy Battista’s Vancouver office.  My practice focuses on personal injury, tort and insurance claims.  Exclusively acting for plaintiffs, I have successfully litigated complex claims in both the Supreme Court of British Columbia and Court of Appeal.

My focus is on personal injury cases in the areas of motor vehicle collisions, slip-and-falls, and other accidents. I have worked on cases involving traumatic brain injuries, psychiatric and psychological injuries, chronic pain, significant soft tissue injuries and other physical injuries.

Before my legal career began, I worked as a lifeguard and later in the security industry.  I have lived in Edmonton, Victoria, Bowen Island and Queensland, Australia.  I obtained his Bachelor of Arts (political science) from UVic in 2009, and my Juris Doctor from Bond University (Australia) in 2012.  I was called to the British Columbia bar in 2013.

Outside of work, I enjoy spending time with friends and family, listening to masterpieces of 80’s popular music, and volunteering for social causes of conscience.

Scott Stanley and Jeff Nieuwenburg successfully acted for an investor on this appeal. The investor lost substantial sums of money investing in an option trading program with Canaccord. The investor won at trial and Canaccord sought to overturn the verdict but were not successful.

Kevin Gourlay acted for a young woman and mother of three who was injured in a motor vehicle accident. At the time of trial, she continued to suffer from mid-back pain as a result of the accident. The Court awarded damages of $91,700, including $60,000 for pain and suffering.

Scott Stanley and Jeff Nieuwenburg acted for the Plaintiff who lost his life savings during the stock market crash of 2008. The elderly Plaintiff had been investing with Canaccord who allowed him to participate in a highly risky option trading program. The Court found that Canaccord failed to properly screen the Plaintiff for suitability for the options trading program and awarded him $212,000 for his losses.

On April 1, 2019, many changes came into effect which alter how ICBC treats no-fault benefit claims (sometimes known as Part 7 claims). Among the most significant changes are increases to the wage loss, homemaker, and death benefit amounts available. Previously, the government increased coverage from $150,000 to $300,000 for…

Insurance Disputes: What are household belongings worth?

People buy home or tenants insurance so they are covered if the unexpected happens. But even if damage is covered by insurance, will you and your insurance company be able to agree on the value of lost items and the appropriate cost of repairs? Today CBC’s Go Public reported about…

Do I need a lawyer? ICBC’s ad campaign…what they don’t tell you.

You may have seen the new ICBC ads in a local paper, at a bus stop or online. ICBC’s new ad campaign suggests that those injured in vehicle accidents should make informed decisions about how to handle an ICBC claim. The ads encourage people to understand their rights. We couldn’t…

How Social Media can affect your claim

For many of people, it is difficult to remember a time before social media.  Facebook, Youtube and Twitter have changed the way we communicate.  Social media has left its mark on the courtroom.  Below are questions and answers about how the Courts have made use of this new technology. Can…

The Law Show: Ep. 36: Protecting Yourself from a Motor Vehicle Lawsuit and Vicarious Liability

On this episode of the Law Show Murphy Battista LLP lawyers Joe Murphy, QC and Jeffrey Nieuwenburg discuss protecting yourself from a motor vehicle lawsuit, vicarious liability, and what to keep in mind when you are looking for insurance to make sure you are adequately covered.

On this episode of the Law Show Murphy Battista LLP lawyers Joe Murphy and Jeffery Nieuwenburg discuss negligence, and liability arising out of accidents on school trips, educational benefits vs. risk, and the importance of having proper insurance.

Hiring a Lawyer: What You Need To Know with Jeff Nieuwenburg

Jeff Nieuwenburg of Murphy Battista LLP’s Vancouver office provides an overview of what you need to know when hiring a lawyer. If you are looking for a lawyer to represent you after a car accident or other injury there are a few important things to keep in mind. Confirm the…

My practice focuses on personal injury, tort and insurance claims.  Exclusively acting for plaintiffs, I have successfully litigated complex claims in both the Supreme Court of British Columbia and Court of Appeal.