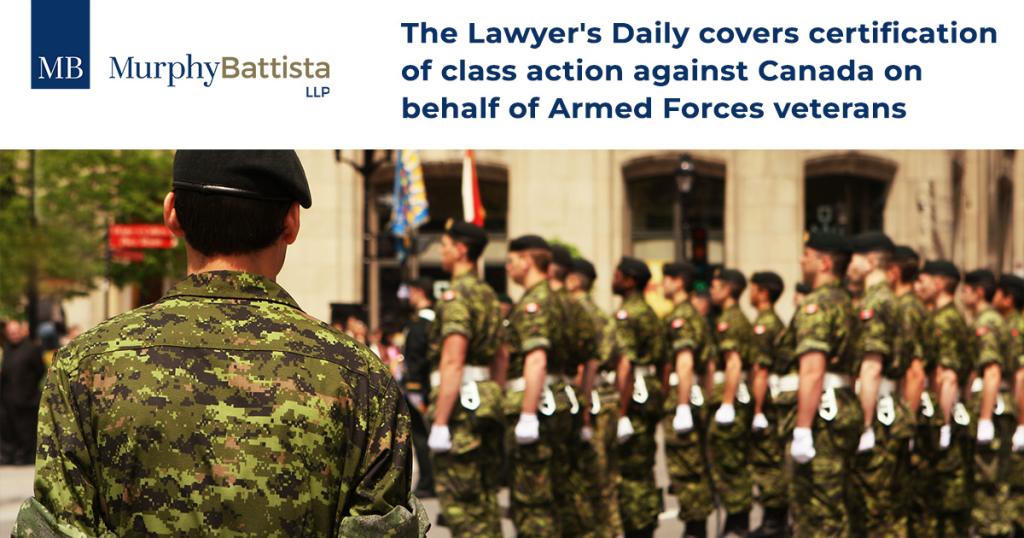 The Lawyer’s Daily recently interviewed class counsel Angela Bespflug to get her comments on the recent certification of Bruyea v His Majesty the King, 2022 FC 1409. This case is a class action against Canada on behalf of Canadian Armed Forces members who were eligible for the Supplementary Retirement Benefit (SRB) as of March 31, 2019, but who may not have received the benefit or received a lower amount than they should have due to inadequate and erroneous advice from Veterans Affairs Canada.

Angela commented, “This is the first time a Court has been recognized that a duty of care may exist – as between Canada and veterans – in Canada’s administration of benefit programs.” She further notes that, “This finding will likely have ripple effects for other litigation brought on behalf of veterans. And rightly so.”

For more information about this class action, visit our SRB Class Action page.

The article in full is below.*

*Article originally published by The Lawyer’s Daily part of LexisNexis Canada Inc. and used with permission.

A class action brought on behalf of an estimated 10,000 veterans of the Canadian Armed Forces against the Government of Canada has been certified by the Federal Court.

“This is the first time that a Court has recognized that a duty of care may exist- as between Canada and veterans –  in Canada’s administration of benefits programs,” class counsel Angela Bespflug of Murphy Battista LLP told The Lawyers Daily in an e-mail.

“This finding will likely have ripple effects for other litigation brought on behalf of veterans,” she said. “And rightly so.”

Sean Bruyea, a former member of the Canadian Armed Forces, brought forth the motion to certify the action as a class action lawsuit, described in the Oct. 14 decision in Bruyea v. Canada 2022 FC 1409.

The veterans are those who were eligible for the Supplementary Retirement Benefit (SRB) as of March 31, 2019, and to the Earnings Loss Benefit (ELB), but who may not have received the benefit or received a lower amount than they should have due to inadequate advice from Veterans Affairs officials.

“Canada failed to reasonably inform [veterans] of the benefits available to them and, in fact, provided erroneous advice to them with respect to these benefits,” said Bespflug in an Oct. 20 news release.

The government established the SRB and ELB in order “to compensate for lower pension earnings and retirement benefits payable to Veterans who were unable to engage in suitable gainful employment because of service-related injuries and disabilities that rendered them totally and permanently incapacitated,” Murphy Battista LLP said in a news release.

Bruyea claims that VAC failed to properly and adequately inform himself and other veterans about financial benefits that they were eligible for, especially regarding the underlying criteria of the SRB, which resulted in smaller payouts for many and caused loss to veterans and their dependents.

The action alleges that VAC employees “lacked sufficient training, awareness and expertise of the various benefits programs, including the Supplementary Retirement Benefit program, to explain and communicate such programs to Veterans,” and as a result, “Veterans received erroneous advice about the Supplementary Retirement Benefit and related benefits and, consequently, did not receive the full value of the benefits to which they were entitled,” the law firm said in its release.

The class action is “about addressing the overwhelming and discouraging bureaucratic complexity in benefits for Canada’s disabled Veterans,” Bruyea said in the release.

Canada should recognize the sacrifice that veterans have made, at the very least “by having a duty to meaningfully inform our Veterans and their families of the benefits they are entitled to,” he added.

As a one-time, lump-sum payment, the SRB was intended to be paid when the veteran reached the age of 65 years, while the ELB was an income supplement payable until age 65. Bruyea claims that VAC never informed him of the SRB, its related eligibility requirements or how it would be calculated.

The Minister of Veterans Affairs was the sponsor and administrator of the SRB program.

The class claims relief including arrears of payment and other losses, general and special damages, an order for the aggregate assessment of damages and monetary relief and its distribution, out-of-pocket expenses and disbursements, pre- and post-judgment interest, and costs.

The court is satisfied that “the proposed representative will vigorously and capably prosecute the interest of the class,” citing the test set by the Supreme Court of Canada in Western Canadian Shopping Centres Inc v. Dutton 200 I SCC 46.

Counsel for the plaintiff were Angela Bespflug and Janelle O’Connor of Murphy Battista LLP.

Counsel for the defendant were Gregory Tzemenakis, Sadian Campbell and James Soldatich of the Attorney General of Canada.

If you have information, story ideas or news tips for The Lawyer‘s Daily, please contact Anosha Khan at [email protected]