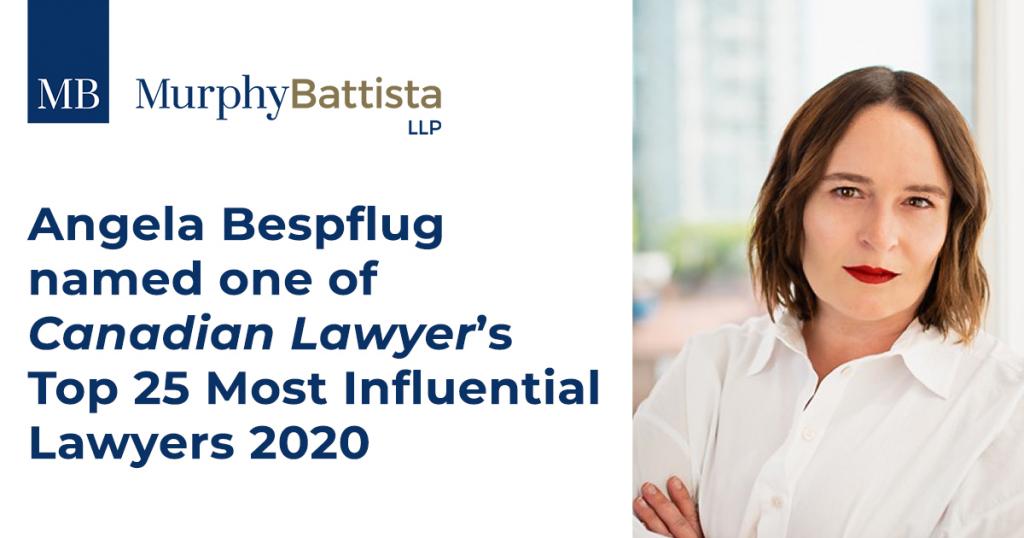 Murphy Battista LLP would like to congratulate our colleague Angela Bespflug on being named one of Canada’s Top 25 most influential lawyers of 2020. Angela is recognized in the category of Human Rights, Advocacy, and Criminal for her exceptional work as class action counsel. Most recently, Angela was lead counsel in the national class action involving thousands of women who alleged that they had experienced discrimination, harassment, or sexual assault while working or volunteering with the RCMP in non-member roles (Tiller v. Canada, 2020 FC 321). In addition to a substantial settlement (estimated at $100 million), the case is significant because it sets the stage for using class action litigation to address systemic sexual misconduct on behalf of individuals who may not have the means to pursue individual lawsuits. In addition to the Tiller case, Angela was involved in achieving settlements related to the first gender discrimination class action against the RCMP and the Sixties Scoop class action, and was involved in the certification of the Indigenous Boarding Homes and Indigenous Hospitals class actions. Currently, she is working on several proposed class actions including the one for the recent privacy breach involving the Canada Revenue Agency and a class action against the Roman Catholic Archdiocese of Vancouver for systemic misconduct in connection with alleged sexual, physical, and psychological abuse of parishioners over several decades.

Angela is passionate about the pursuit of justice for people who might not otherwise be able to defend themselves or seek compensation for wrongs committed against them by institutions, governments, and other powerful entities in Canadian society. We are delighted to have her as part of the Murphy Battista team and to work alongside her for the benefit of all our clients.

Read Canadian Lawyer Magazine’s story on The Top 25 Most Influential Lawyers of 2020.