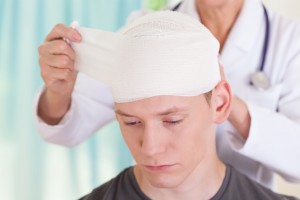 In a recent episode of AM 650’s “The Law Show,” Bill Dick and Scott Stanley spent some time discussing brain injuries with a specific focus on mild traumatic brain injury. Bill and l also explained some of the legal issues surrounding sport-based injuries including brain injuries that are the result of equestrian accidents. We also set aside time to discuss the complex issue of waivers and how these documents can limit your ability to seek compensation for an athletic injury. Because concussions are such a hot button issue these days, we decided to create a blog post summarizing some of the key points that we covered on “The Law Show.” If you’d like to view the whole episode, you can click on the video below.

The term Mild Traumatic Brain injury can be confusing to clients who are unfamiliar with neurology. It’s not uncommon for a client to come into our offices having suffered a concussion, without realizing that what they suffered can also be characterized as a brain injury. Further, these individuals are often unfamiliar with the long term or diffuse effects that such an injury can have on the brain. Too often clients fail to realize that symptoms including concentration or memory issues, increased irritability, sensitivity to light and noise, sleep disturbances, or psychological adjustment and depression problems can be an ongoing result of a concussion.

A Lack of Insight: The Brain Injury Problem

A major issue that we face with almost all our mild traumatic brain injury clients is that these individuals often look and act in a way that would appear normal to an uninformed third-party. It’s only after you talk to the individual’s friends and family that you begin to understand the deficits that appeared in the wake of the injured party’s concussion. Further complicating matters, a common symptom of most brain injuries is a lack of insight. This means that even the injured party is at times unable to adequately describe how they have changed following a brain injury. This is why collateral witnesses such as a spouse, a child, or a parent are indispensible in most mild to severe brain injury cases. A spouse or family member will see changes that are hidden to the uniformed observer.

Sports and Increased Focus on Concussions

The reason why concussions have become such a hot button issue is due largely to the highly publicized complications that concussions have had on the lives and careers of professional athletes. Further, the fairly recent discovery of tau protein and its role in the development chronic traumatic encephalopathy has had a massive effect on the way that professional and youth sports leagues treat players that suffer concussions. While only 20 years ago a player like Eric Lindros might suffer a concussion and then be pressured to return immediately to the ice, Sidney Crosby’s year long absences from the NHL show that treatment of brain injuries has improved immensely in the last few years.

If you have a child playing in a sport prone to concussive injuries then it’s a good idea to check the insurance package of their team and make sure that concussions are included as an injury for which a player can receive compensation. If this is not the case, then it might be a good idea to buy additional insurance to make sure that your child is covered in the event of a sports-related brain injury.

Bill Dick works out of Murphy Battista’s brand new Kelowna office. As a resident of the Okanagan and a personal injury lawyer with years of experience serving this community, he is far too familiar with injuries resulting from horse-riding accidents. The major issue with trail riding is that too often the participants want to look like the cowboys that they have seen on television or in the movies. This means that when offered the choice of a cowboy hat or a helmet to wear on their trail ride, they’ll make the unfortunate decision of choosing the cowboy hat. Although helmets won’t necessarily prevent a brain injury, they will certainly minimize the probability of one occurring.

In trail riding and other sports or activities with a high risk of injury, participants are often required to read and sign waivers prior to participating. Although these waivers can represent a significant roadblock to a successful injury claim, there are cases where the company that created the waiver fails to communicate the actual level of risk or fails to include certain provisions in the waiver to adequately block a legal action. It’s important to understand that the presence of a waiver doesn’t automatically stop you from receiving compensation for an injury. Although lots of waivers stand up in court, many do not.