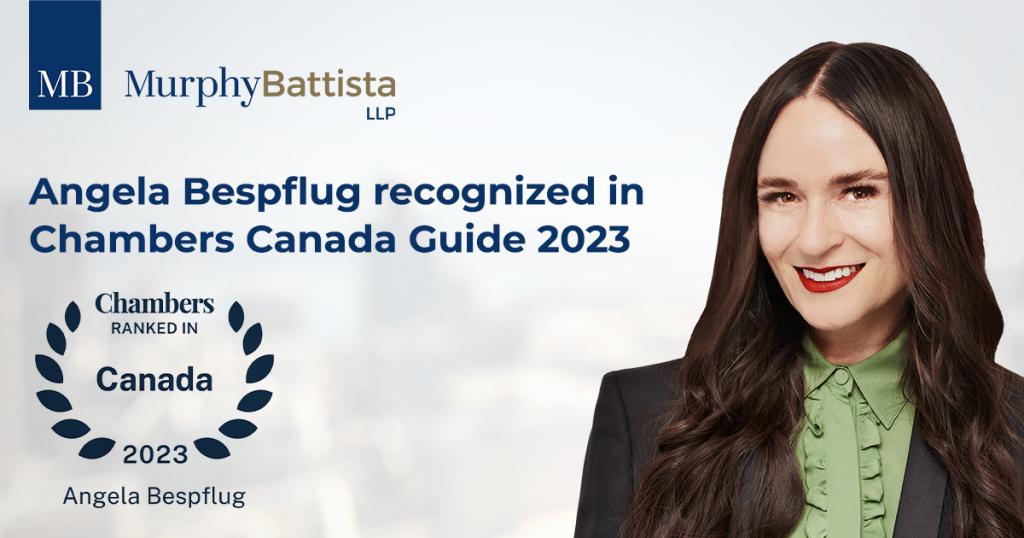 Murphy Battista LLP is delighted to announce that our colleague Angela Bespflug has been ranked in the Chambers Canada Legal Guide 2023 for her dispute resolution work on behalf of plaintiffs involved in class actions.

Ranking in Chambers & Partners is widely acknowledged as a mark of excellence across the legal industry.

Angela’s work on high-profile and historic class actions has garnered her national and international attention, and she has been recognized by the Federal Court as a “leading practitioner” in the field of class actions.

Her work as class counsel has resulted in combined settlement values totalling more than $800 million. She was lead counsel on a class action brought against the RCMP that resulted in a ground-breaking settlement and an estimated $100 million in compensation for female class members subjected to sexual harassment and assault in the RCMP workplace. The action is part of an emerging body of jurisprudence that seeks to push Canada’s judicial system to accept class actions as the preferable procedure for resolving claims of systemic sexual misconduct.

Currently, she is the lead counsel on a class action against Canada by Indigenous children who lost their cultural identity as a consequence of being apprehended off-reserve and placed into state care. She is also counsel on numerous class actions that seek to push the boundaries of the law, including actions focused on Indigenous rights, sexual misconduct, veterans’ rights, pension calculation errors and commercial wrongs.

Angela has also been named Plaintiff Litigator of the Year by Benchmark Canada in 2022 and 2021 and one of the Top 25 Most Influential Lawyers of 2020 by Canadian Lawyer magazine. She is recognized by Global Law Experts, Who’s Who, Global 100, Lawyer International, Lawyer Network, and Advisory Excellence for her work as class counsel.

Congratulations on your latest achievement Angela!

Learn more about Angela Bespflug’s professional background, visit this link or connect with her on LinkedIn here.