Injury Resources > Plaintiffs Litigation Blog > How I Got My Identity Back

In honour of Music Therapy Awareness Month, I wanted to share my story of how music helped me get my identity back.

Picture a little girl in a frilly blue dress, singing dramatically alongside a TV flickering with images of Disney’s 1987 classic, The Little Mermaid. Right now she’s belting out, “Look at stuff, isn’t it neat, wouldn’t you think my collections complete?” and her father is straining not to tell her to be quiet as this is probably the 18th time she’s watched the movie this week.

That was me. And that was the moment I realized I was going to be a singer when I grew up. Throughout my childhood I joined any opportunity to sing or express myself creatively; vocal lessons, choirs, musicals, or just hallways with delicious natural reverb.  In high school I picked up the guitar and with a feeling akin to love at first sight, I began writing my own music. It wasn’t long before I was performing at open mic nights, and then busking at Granville Island. Something about being on stage, performing, felt natural to me. I still feel that way –  like I’ve come home.

Despite pressure from the parents to go into a more practical profession, I determinedly put myself through a year of Basic Musicianship at Douglas College, with the intent to continue further at the Capilano Jazz Program. But in the summer of 2008, right after I finished up my time at Douglas, I got into a serious car accident and broke my neck at the c4/c5 vertebrae.

I thought my career in music was over.  Well, admittedly, at the time I thought my life was over. When I first came out of surgery I was fully paralyzed and was told I had a %10 chance to walk again. I won’t go into the details of my recovery here, but through hard work and determination, and with the invaluable help of my team of friends, family, nurses, doctors and occupational and physical therapists, I recovered to the point where I was able to walk again, albeit with a stubborn stiff limp.

However, I was still left with extensive nerve damage resulting in chronic pain, fatigue, patchy sensation and movement; the worst of which was on my left side. Specifically, this meant I could no longer play my guitar. My fingers just couldn’t pull it off.

Safe to say I was crushed beyond imagining. I have grieved over a lot of losses that resulted from this injury, and arguably, not being able to play guitar and write music was one of the worst. It was everything to me. It was my identity.

It took years before I could even consider getting back into creating music. Every time I tried – picked up my guitar and made the effort – I ended up a blubbery mess of tears because the music simply wouldn’t come out.

But then I got involved with the Vancouver Adapted Music Society (VAMS), a non-profit organization that helps musicians with disabilities. Through VAMS I worked on a series of Music Saves music videos, working alongside the likes of Adaline, The Odds, and more. I was also given the opportunity to sing on stage again. It was an incredible thrill to be under those lights, to sing again, and to collaborate and work on music with such incredible people. I couldn’t play guitar and accompany myself, but I was gifted the opportunity to have The Odds as my band. It was insane. And I felt a wilted flower inside me begin to stir, then blossom suddenly back to life. VAMS showed me the way back to the most important part of my life, by proving that creating music is always possible, you just have to adapt to a new way.

Eventually I started fiddling with the piano again, noticing that although my left hand has weakness, I could still write a decent treble line, and keep my bass line simple. This was a game changer for me; the most phenomenal thing happened to me since that day I broke my neck: I wrote a song.

The flower exploded into a garden. 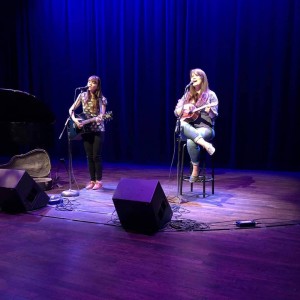 Through the encouragement of VAMS members, soon I picked up the ukulele, which is a much easier instrument to play with my numby little fingers, and found I could actually serviceably play it. I now perform as a solo and collaborative artist, singing covers and originals, at venues around the city. I’ve worked with insane Canadian talent such as Chin Injeti, Craig Northey, Bobbi Style and Rolf Kemp, and I’ve worked diligently to become an integral member of the disability and local Vancouver music communities. As of January 2017, I even joined the board of directors for the society that helped me so much in recovering my identity. I may not be able to play an instrument live on stage anymore, but this disability, in a tragic twist of luck, has afforded me unique opportunities to meet and work with people I would never have otherwise had the chance to do. 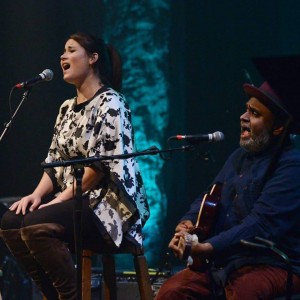 Breaking my neck and adjusting to life with a spinal cord injury left me feeling as if my identity was shattered. It was a long journey, but one in which I discovered that there is always a way to continue your passions in life, as long as you open yourself up to opportunity. For me, with music, it was Vancouver Adapted Music Society, and now there’s another platform through Wingspan Dis/arts, an  intellectual ‘studio’ of interdisciplinary scholars in disability studies, arts, culture, and public pedagogy.

If you are a musician struggling with a disability, I highly recommend you get involved with VAMS. They’re currently building a brand new studio with adaptive equipment to accommodate an incredible degree of ability. You can learn, produce, and play music. Most importantly, you can find the way to reconnect to your musical self. 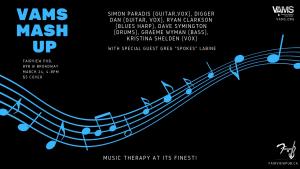 For a list of VAMS events, including concerts and drop-in music lessons, please head to their website.

Note: This post was originally published in September 2019 and has since been updated with relevant items