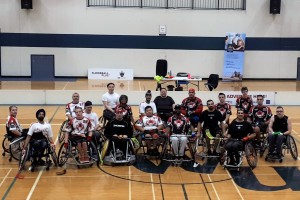 This past month of August was one for the record books. From the sauna like conditions of the extreme heat and dryness, to the numerous wildfires as a result, August 2018 will be one we will not forget. This can also be said for the first ever wheelchair floorball-hockey tournament held on Canadian soil August 18-19 of this year at Trinity Western University in Langley.

BC Wheelchair Floorball Association worked very hard to put this tournament in place, but it would not have been possible without the generous donations of our sponsors that helped along the way. Sponsors such as Murphy Battista LLP who provided lunch for all involved in the Western Canadian Wheely Open to keep us fueled, and Sticky’s Candy and Bakery in Langley who provided desserts and gift baskets for the tournament. Donations from community partners helped to run this tournament in more ways than one and would not have happened without their support.

The tournament itself was a huge success. The Western Canadian Wheely Open had four teams register originally, and then players were added to each team to round out the squads so as to make the games as even as possible. Team Canada 1 beat Team Canada 4 by the score of 5-2 in the first game of wheelchair floorball in Canadian history. Riley Molnar scored the first goal in Canadian history that was assisted by player of the game, Ryan Young.

The second game between Team Canada 2 and Team Canada 3 started with a fist fight in the opening half, but what is a game of hockey without a little fisticuff. The funny thing was, it was between two teammates that couldn’t get along at this time. Needles to say, it was the first time anybody had ever witnessed a wheelchair bout. Thankfully, the referees stepped between the two combatants before anyone got injured, and the two individuals involved were hanging out together again by the end of the day after being disciplined by the tournament officials. This game ended up a 4-4 tie with newcomer Joel Aukema earning player of the game honours with a goal and an assist.

In the finals, Team Canada 2 played Team Canada 3 in a rematch of the only tie in Saturday’s round robin, 4-4. The championship game was the highest scoring of the tournament where Team 3 won by a score of 7-4 where Shaun Mills earned player of the game with the game of his life involved in all but one of his teams scores contributing 5 goals and 1 assist to the winning cause. The team that fought and made up went on to win the first ever Canadian Wheelchair Floorball-Hockey Championship in true Canuck fashion. Team 1 ended up in third place with a 4-1 victory over the winless but much improved Team 4.