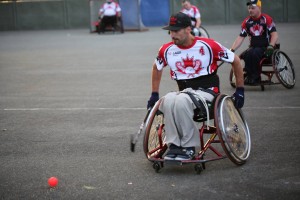 August 18th and 19th 2018 will mark the first ever wheelchair floorball-hockey tournament played on Canadian soil, or on Canadian floor to be more precise. The gymnasium at Trinity Western University in Langley will host these games and will be home to visitors from as far as Austria who will be challenging for the Canadian championship. This championship will be called the Western Canadian Wheely Open 2018.

Normally, local players will have pick-up games at the Roundhouse Community Centre Thursday’s at 6:00pm-7:45pm and Sunday Morning’s 10:30am-12:30pm at Queen Elizabeth Park. Some players from the BC Wheelchair Floorball Association (BCWFA) have been to tournaments representing Canada in Europe including the Para Games Breda in the Netherlands and the Swiss Wheely Open in Notwil, Switzerland. Players from other European countries thought it would be great if there was ever a wheelchair floorball tournament on the true north native land. It has been a lot of hard work and plenty of long hours spent in the process, but BCWFA is happy to be putting on this gathering for wheelchair athletes from across the country and around world.

Over 500 invitations were sent to wheelchair athletes in Canada, the USA and all over the world from Spain to Sweden to Morocco. BCWFA is expecting to have 6 teams take part in this first ever tournament of its kind. Expecting 50 players, 6 referees, and 12 volunteers to participate in this tournament, and who will ultimately be the heart and soul of these games. It will be the players and volunteers who will make these games good, but it is the sponsorship that will make these games great.

Murphy Battista has agreed to sponsor lunch for the players and volunteers while the players fight for glory and the volunteers assist in having players reach their goals. This tournament would not be possible if it were not for sponsors like this. We will also have other local community partners helping us out at the event including Advanced Mobility, Spinal Cord Injury BC, and Chair Stuff Medical Supplies. These community partners will help cover the cost of things like gym rental, insurance, and supervision. There will also be a raffle for a bunch of different swag from other community friends such as the Rick Hansen Foundation, The Hockey Shop, as well as pictures and frames made by local artists.

The BC Wheelchair Floorball Association is still taking entries for the Western Canadian Wheely Open. As in the name of the tournament, it is open to anybody who would like to join, disabled or not. BCWFA will even supply the sports wheelchairs, sticks, and equipment that you need to play. Entry is now $30 per person and individuals will be placed on teams as needed. Or if you have a team, you can register your whole team to play.

If you would like more information on BC Wheelchair Floorball Association and the Western Canadian Wheely Open, please visit www.bcwheelchairfloorball.ca and like us on Facebook. Wheelchair floorball events, rules of the game, and the final countdown to the tournament can be found on our website.