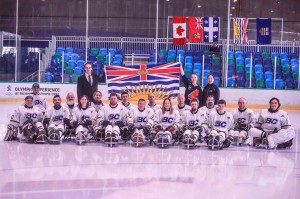 The BC Provincial Sledge Hockey team played in the 3rd annual National Sledge Hockey Championship held at the Richmond Olympic Oval this year. The tournament took place May 11-13 and played host to incredible action from four of the top teams from across the country, including two-time defending champs Alberta, a young and fast Ontario squad, and a big, strong team from Quebec. Team BC rostered myself to the squad, but a sprained wrist kept me out of the line-up and on the bench running the offence gate for line changes. It was an honour to make the team after so much hard work, and it was a pure pleasure to be there for my teammates while they played their hearts out.

Two weeks earlier, two BC players were invited to the team Canada developmental camp where these players were on the radar to get the call from the national team to one day play for their home country. One of the players, goalie Trent Seymour from Prince George, BC, made the developmental team as this was his second tryout with the squad.

This year at nationals, Quebec opened up the tournament with a 2-1 win over Ontario, where Quebec scored the game-winner in overtime. BC played their first game against Alberta Friday morning, with Alberta dominating play and never letting a shot past their goalie. Team BC played a great positional game but could not keep up with the fast pace of a team that had a handful of members from the Canadian developmental team. Alberta took BC by a score of 8-0. Alberta had a quick turn-around to play Quebec Friday afternoon and ended up winning that game by a score of 4-0. Team BC then played team Ontario on Friday evening and Ontario never let up the whole game, winning by a score of 7-0.

On the morning of Saturday, May 12th, Alberta met Ontario in one of the best games I have ever seen. This match went back and forth and ultimately Alberta got the advantage, winning 3-2. As the tournament progressed so did the skill level of team BC. We met Quebec for our first match of the day, only losing by a score of 6-0. After winning all of their round-robin games, Alberta was ranked number one and since BC had lost all of their games, they would be 4th seed. BC was getting better in the grand scale and would look forward to shocking the defending champions in the 1st vs. 4th place game for a birth into the finals. Quebec would play Ontario first in the game that saw 2nd vs. 3rd place. Quebec also won their game against Ontario by a score of 5-3 in one of the chippiest games of the tournament.

In the 1st vs. 4th place game of Alberta vs. BC, Alberta took a quick 1-0 lead in the first period. BC player Kyle Evans then scored their first (and only) goal of the tournament from a sweet feed from line-mate Riley Molnar, allowing BC to take the two-time defending champions into the first intermission with a 1-1 tie. Team BC was elated to have the Albertans sweating all through the 15-minute intermission break wondering what had just happened. The second period, however, was never friendly to the British Columbians in this tournament. Alberta peppered our goalie relentlessly firing 15 shots in this period and gaining a 5-1 edge by the end of the second. At the beginning of the third period, goalie Trent Seymour went down with a sprained shoulder after blocking a shot. Backup goalie Philipe Bonnot got the call and dazzled the crowd making 14 saves on 15 shots. While the score ended up 6-1, the BC squad could hold their heads up high knowing they gave the defending champs a run for their money.

On Sunday May 13th, BC played Ontario for a chance to win the bronze medal. While BC kept up with team Ontario and had a much better game than the first 7-0 defeat two days prior, BC still gave up 5 goals and ended up finishing in 4th place with a 5-0 loss. In the championship game, Alberta took a 1-0 lead in the 2nd period and never gave an inch to the Quebec team, winning the game by a score of 1-0. The Albertans were excited to win the national championship for the third year in a row, while team BC could look forward to improving on their 4th place showing at home this year in Richmond.

Ontario will host this tournament in 2019 and you can expect team British Columbia to take what they learned this year to improve, work even harder, and make the push to play for the gold medal next year.

If you would like more information on sledge hockey and where to play in BC, please visit: